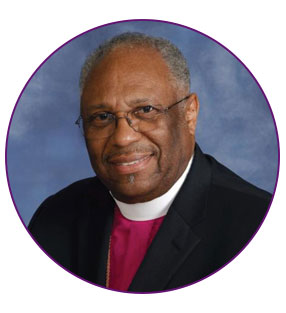 Native of Eden, NC, he is a graduate of Douglas High School and Winston Salem Sate University. He has further studied at Southeastern Baptist Theological Seminary, Wake Forest, North Carolina and graduated from the Huston Graduate School of Theology with an MA in Theological Studies. He holds the doctor of Divinity Degree from United Christian College at Goldsboro, NC.

Bishop Cohen is married to the former Linda J. Broadnax of Eden, North Carolina and is the father of LeGrand, Harold, and Jeffrey. He is the proud grandfather of Harry, Aliyah, Charity, Trinity, Joshua, Faith and Serenity.

Bishop Cohen entered the ministry of preaching in July of 1969. He has served the people of God as Pastor's Kid. Student, Sunday School Teacher, Musician, Choir Director, Evangelist, Assistant to the Pastor, Pastor, District Elder, member of the Presbytery. Member of he Board of Elders of the Southern District Convocation, Vice President of the New England District convocation of the Original United Holy Church International, Inc.

He has served as pastor of the New Covenant Holy Church of Burlington, NC, Inc. for the past  42 years and the St. mariah Holy HCurch of reidsvill, NC for the past 21 years. Two of the years wer poositional due to the continuted pastorate of his mother, Mother Lettie Chohen.

In August 1995 he was elected aas the Vice President of the New England District Convocation, Bishop Lewis P. Miller, presiding prelate and served Faithfully until 1999 when the Re-unification of the Original Unity Holy Church and the United holy Church became a reality.

Bishop Cohen's motto is "The Only Way Up Is Down." He considers himself to be a servant of God to the people of God. He serves with a smile.