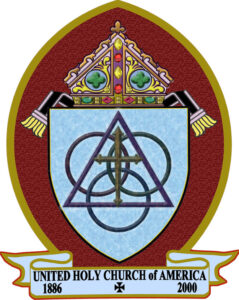 Reverend Hargrave is the pastor of Gospel Tabernacle United Holy Church in Burlington, NC. He has remained here for over 32 years. He has attended the Jones School of Religion, Alamance Davidson Community Colleges and is a honor graduate of Winston Salem State University. He has also received two Master's degrees, an MA, Biblical Studies and an M-Div in Christian Ministry from Carolina Graduate School of Divinity. He received the Doctor of Ministry Degree in May 2013.

Right Reverend Dr. Greg K. Hargrave has been married to Minister Kim Carson Hargrave, the love of his life for over 30 years. To this union hey are blessed with 3 beauriful daughters, and 3 grandchildren; Karson, Karmen and Haylen. He is the 7th of seven children born to the late Clarence and the late Irene Hargrave. His early ministry began in Lexington NC at the Florida United Holy Church under the leadership of Elder Fred T. Jnes Sr. This is where he preached his inital sermon at the age of 18.

At the age of 23 he was ordained an Elder in the United Holy Church of America. In May 1985 he was appointed pastor of Gospel Tabernacle United Holy Church Burlington, NC. initially this was to have been a 3 month supply; however bishop Hargrave has remained at this one and only pastorate for over 32 year. Bishop Hargrave attended the public schools in Lexington Cn, and is a 1980 graduate of Lexington Senior High School, graduating as Senior Class President.

Bishop Hargrave has exemplified a visionary leadership style during his pastorate. Numerous ministries and growth has resulted, along with the following accomplishments.